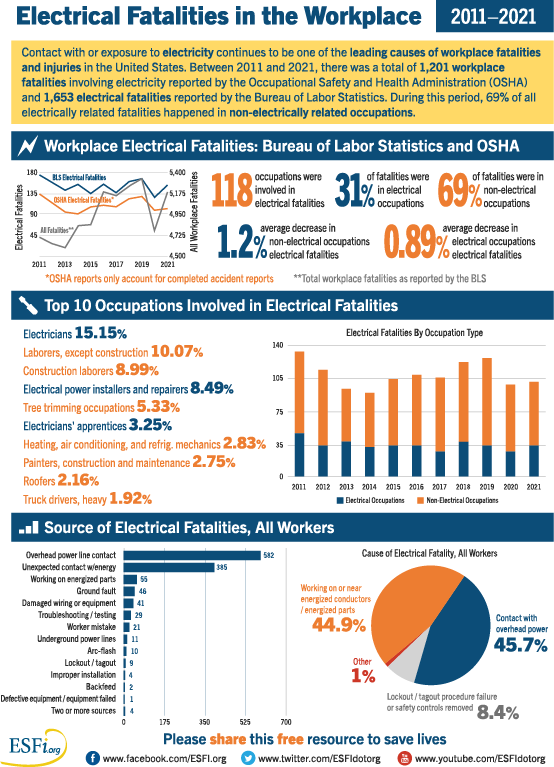 The Electrical Safety Foundation International (ESFI) uses the U.S. Bureau of Labor Statistics’ (BLS) Census of Fatal Occupational Injuries (CFOI) and Survey of Occupational Injuries (SOII) to distill information specifically pertaining to fatal and nonfatal occupational electrical injuries. Each year the ESFI publishes electrical injury information in tabular and graphical form on our website. The most recent data covers the 30 year period from 1992-2021 but mainly focuses on 2011-2021 data.

ESFI’s occupational electrical injury and fatality information has been compiled from data published by the U.S. Bureau of Labor Statistics (BLS) and the U.S. Census Bureau.

Each year the BLS performs its Census of Fatal Occupational Injuries (CFOI) – an actual count, or census, of fatal injuries. Each case is verified by two or more independent sources of information. Such sources can include death certificates, police reports, news reports, OSHA reports, etc. Similarly, to estimate the number of nonfatal injuries and illnesses, the BLS performs its Survey of Occupational Injuries and Illnesses. Nonfatal injuries, due to their sheer number, are statistically estimated based on a large annual survey of injuries reported by employers.

Rates of electrical injury normalize the data for exposure to a hazard, thus better describing the hazard to a particular group. For example, rates allow direct comparison between industries or occupational groups of different sizes.

The rates of electrical injury shown in the figures as follows:

The most recent occupational electrical injury and fatality data covers the period from 1992-2020 , but mainly focuses on 2003-2020 data.

The Electrical Safety Foundation International has compiled the occupational electrical injury experience of the major industries and occupations from data available through the U.S. Bureau of Labor Statistics for the period 2003 through 2010.

A total of 42,882 occupational fatalities occurred from all causes and 1,738 of those were due to contact with electric current. The construction industry had the highest number of electrical fatalities (849), followed by professional and business services (208), trade, transportation, and utilities (182), natural resources and mining (154), and manufacturing (137). Just five occupations in the construction trades – electricians, construction laborers, roofers, painters, and carpenters – experienced more than 32% of all electrical fatalities, electrical power line installers and repairers about 8%, and tree trimmers about 5%.

All of the 163 electrical fatalities during 2010 were men; the self-employed were about 22% of all occupational deaths but only 19% of electrical deaths; nearly 68% were white, less than 6% were black, 24% were Hispanic; 98% died of electrocution; 63% were constructing, repairing or cleaning something at the time of death; 34% died on industrial premises, 28% at a private residence, and nearly 12% on a street or highway, and; 96% were employed in private industry.

In order to fairly compare industries and occupations with different numbers of employees (hence different total exposures to electrical hazards) rates of fatal and nonfatal electrical injury were computed. It was shown that electrical fatalities were approximately 4% of all occupational fatalities each year between 2003 and 2010. “Contact with overhead power lines” was the leading fatal injury Event for the period, but was a minor source of nonfatal electrical injury. “Contact with wiring, transformers, or other electrical components”, “Contact with electric current of machines, tools, appliances or light fixtures”, and “Contact with electric current, unspecified” were the next largest fatal Event categories, respectively.

Workers in four industries, utilities, mining, construction, and agriculture, forestry, fishing, and hunting experienced electrical fatality rates in excess of the rate Private Industry rate every year between 2003 in 2010. Utility and construction workers also experienced nonfatal electrical injury rates in excess of the Private Industry rate each year between 2003 and 2010.

Learn more in our resource: Electrical Safety Then and Now – Twenty Years of Electrical Injury Data Shows Substantial Electrical Safety Improvement, which discusses some of the more interesting patterns observed in occupational electrical injury and fatality statistics for 1992-2010.

Sign up to receive our monthly newsletter to stay up to date with our new content. The newsletter features topical electrical safety materials and free-to-share resources you can use throughout your community.